As a result of climate change, there will be changes in land use and precipitation leading to increased inputs of optically active substances (suspended and humic substances, and algal turbidity due to nutrients). These substances lead to attenuation of plant available light (KdPAR) in water bodies, thereby affecting submerged aquatic vegetation. Macrophytes play an important role in the structure and function of aquatic ecosystems, so changes in species composition affect overall aquatic biodiversity. Therefore, through the collaboration of Subproject 3 “Tipping Points in Limnetic Systems” and Subproject 2 “Biodiversity Tipping Points in Climate and Land Use Change”, the following hypotheses will be tested:
(1) Climate change-induced changes in inputs of optically active substances affect the composition of submerged aquatic vegetation and thus the overall biodiversity of Bavarian lakes.
(2) There are threshold values of the inputs (tipping points) that lead to significant shifts within the submerged vegetation.
For this purpose, native and non-native macrophytes are exposed to different turbidity and temperature scenarios in mesocosm and aquarium experiments and the effect of the changed environmental parameters on the development of the plant (populations) is analyzed (Fig.1). The experiments have already shown that
I) A general macrophyte depletion is only to be expected as a result of very high turbidity (KdPAR > 3.0 m-1) in the water bodies, which, however, presupposes that in the future there will be an extremely strong increase in regular substance inputs or increased extreme inputs due to e.g. floods.
II) The development of certain macrophytes, such as waterweed and mermaid weed, may be enhanced by a moderate increase in turbidity (KdPAR ≤ 2.0 m-1) (Fig. 2). Since both species are known for their rapid spread and invasive potential, displacement of other macrophytes is likely under these circumstances. In the case of direct competition between the two species, turbidity duration is critical in addition to intensity to determine which genus dominates.
III) Higher water temperatures will further exacerbate turbidity effects on submerged aquatic vegetation in the future. Faster spring warming will allow waters to reach a temperature range earlier where turbidity has a detectable effect (15-18°C). In summer, on the other hand, both the inhibiting and promoting effects of turbidity are enhanced.
Thus, the consequences for submerged aquatic vegetation depend on how much lake turbidity increases in the future due to climate change and land use changes.

Goal of the subproject

Climate and land use change result in increased inputs into lakes. This includes loads of suspended and humic substances as well as nutrients that promote algae blooms. Such inputs act directly or indirectly as optically active substances and influence the light available to water plants. This effects aquatic plant communities, which structure aquatic habitats and supply essential functions to the lake ecosystem. Consequently, changes in the composition of aquatic plants will have a significant impact on the overall aquatic biodiversity. 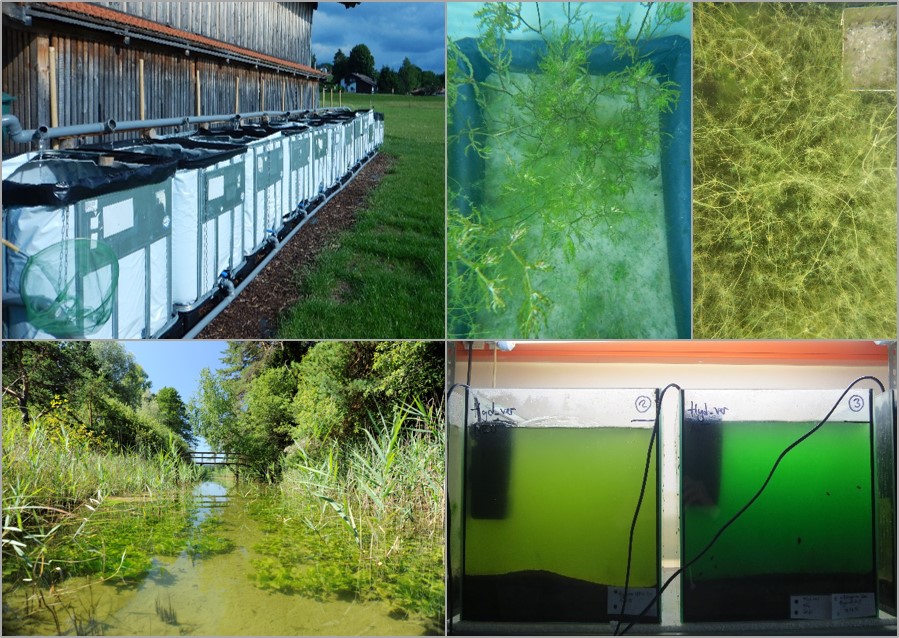 The objectives of subproject 3 are:

In cooperation with subproject 2, the tolerances and preferences of selected aquatic plants (macrophytes) are determined in experiments. On this basis, macrophyte and biodiversity models will be optimised. These studies are based on climate and land use scenarios developed in subprojects 1 and 4. In this way, data for the optimization of biodiversity models will be collected and the predictions of the models confirmed.